As 2019 leaves behind a legacy of movies, 2020 welcomes us with quite a collection! The excitement that the wait is finally almost over as highly anticipated movies are going to hit the theaters soon, and since its never too soon to know how you will be spending your time at the movies, have a look at some of the movies that will be released in the upcoming year:

Birds of Prey: (And the Fantabulous Emancipation of One Harley Quinn):
Directed by: Cathy Yan
Starring: Margot Robbie, Jurnee Smollett-Ball, Mary Elizabeth Winstead
DC Comics lives up to their promise and delivers Margot Robbie as Harley Quinn since her first appearance in Suicide Squad. Once a crazy criminal, Quinn turns into a vigilante after splitting with the Joker, joining forces with superheroes Black Canary, Huntress and Renee Montoya to save a young girl from an evil crime lord.

Godzilla Vs Kong
Directed by: Adam Wingard
Starring: Millie Bobby Brown, Kyle Chandler, Rebecca Hall, Brian Tyree Henry
The showdown between the most popular beasts is almost here! During a time where humanity is fighting for its existence, and monsters roamed the planet, Godzilla and Kong, two powerful forces will face each other in an ultimate battle, who will rise victorious?

Scoob!
Directed By: Tony Cervone
Starring: Zac EfronMark Wahlberg, Gina Rodriguez, McKenna Grace, Amanda Seyfried, Kiersey Clemmons, Jason Isaacs, Ken Jeong, Will Forte, Frank Welker, Tracy Morgan
Scooby and the gang are back at it again! This time the movie talks about the origins of Scooby Doo and how he met his lifelong friend Shaggy and joining forces with young detectives Fred, Velma and Daphne to form the Mystery Inc. Together they face their biggest mystery ever—stopping a dog-apocalypse. However, the gang discovers that Scooby Doo is more than just a mystery solving dog, but one that has a secret legacy and an epic destiny.

The Conjuring 3
Director: Michael Chaves
Starring: Patrick Wilson, Vera Farmiga, Sterling Jerins, Charlene Amoia
Ed and Lorainne Warren will be back for the third movie from the Conjuring will hit before Halloween. Producer and previous director, James Wan, recently confirmed that the storyline will revolve around a man who is on trial for committing a murder and the reason was possession. The Conjuring films have been previously known for basing the actual event on actual past Warren cases, therefore we can definitely count on this one not being any different.

This was just a small sneak peak of what 2020 will bring and a lot more to come from Scarlett Johannsson’s Black Widow to Tom Cruise’s Top Gun: Maverick. Stay tuned for more updates and new on the upcoming 2020 movies. 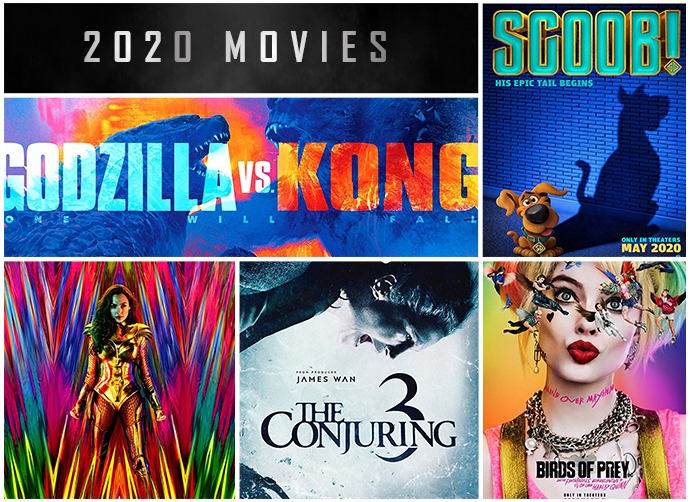